Baby Rafael’s Entry Into the World 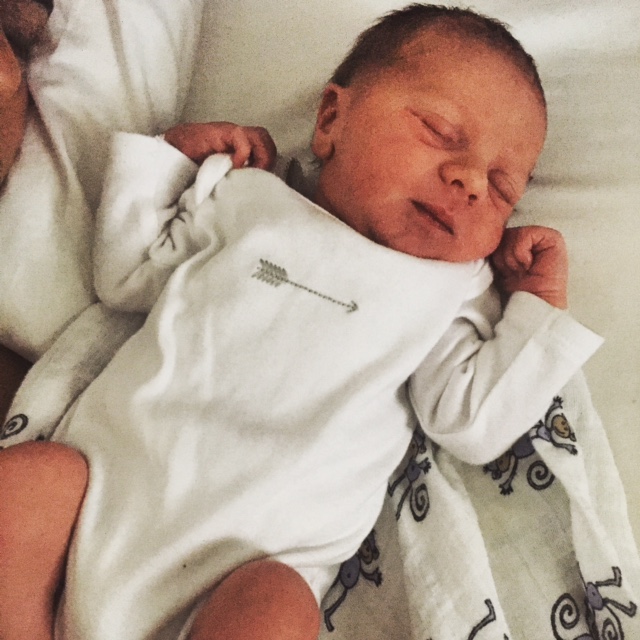 As I write this final chapter in the journey of my pregnancy, I am looking down upon my beautiful little baby boy, wriggling and squirming on his little play mat on the floor….such an image of adorable perfection. It’s hard to believe he’s here and at the same time, unbelievable that less than two weeks ago he was cocooned inside my body, protected from the outside world.

I wasn’t sure if I was going to share my birth story on my blog but like all the other aspects of my pregnancy that I have shared, it seems like the natural conclusion to the story. Finding time to pen this experience has been challenging since his arrival. It’s amazing how time flies, consumed only by feeding, sleeping, changing nappies and staring at our beautiful creation. I can lose hours.

My third trimester update was written a few weeks before Rafael entered the world. Two weeks exactly in fact. I did this because I had a feeling he was coming early (which he did) and I didn’t want to miss posting about the last trimester if that eventuated. A few things changed in those final weeks which are probably worth mentioning. I said in my last installment that for the most part, I had had relatively good levels of energy throughout my pregnancy. That energy diminished completely in the final two weeks and I found myself spending way more time at home. Walking became very painful and I likened the feeling to trying to hold a bowling ball in my pelvic area. I felt a lot of downward pressure so movement became somewhat limited. This was a positive sign as it meant bub’s head was fully engaged so I instinctively felt like birth was not far away. I was right…

On the day before Rafael was born, I was feeling particularly uncomfortable. Moving hurt in all of the ways I described and more. I had an acupuncture session that was focused on helping gently prepare the body for labour and I joked with my TCM that I was ready for baby to come now and asked him to give it a little nudge.

That night, we visited my father’s house for dinner and he commented as I grimaced at all the painful movements in my lower pelvis that he thought baby was not far away. He was right. The following morning at 3am I awoke to find that my waters had broken. I wasn’t sure if it was real labour or not so I went back to sleep until about 5.30am when I started contracting regularly. Iggy and I were both so excited that we were going to meet our baby some time today so staying asleep longer was not an option.

I had been advised by my Doula Gabby that early labour can last for a long time and that it was best to ride it out in a relaxed state at home to avoid unnecessary intervention. Iggy went off to work and I pottered around the house, timing my contractions and busying myself with packing and organizing the last minute things to take to the Birthing Centre. Contractions were about 10 minutes apart and manageable so I knew that I was still in “warm up” mode.

Around 11.30am I started contracting more regularly so asked Iggy to come home from work & for a while I continued to labour moving around the house in different positions to manage the pain of the contractions. We decided to call our Doula Gabby after lunch and she arrived around 1pm. Almost immediately upon her arrival my contractions started to intensify and I found I could no longer participate in any chit chat with Iggy or Gabby. During contractions, I was in too much pain and needed to focus inwards and on my breathing. In between, I really just wanted to zone out and collect my energy for the next round, I was thankful for all the hypnobirthing I had done in the months prior as the breathing technique really helped to manage through each contraction.

My memories of early labour are much clearer than during the final 6 or so hours and I wonder if this fading memory is a biological mechanism to ensure that we have more than one child. While we were still at home I remember becoming aware of the fact that my contractions intensified again and that I could no longer breathe through them. I found myself making noises similar to those I had heard other laboring women making when I had visited the Birth Centre. At this point Gabby suggested we head into the Birth Centre. The car ride there was one of the lowlights of my birthing experience. Any woman who has driven to hospital in established labour will tell you the trip there is the worst and mine was no exception. The rocking and swaying of the car induced nausea and vomiting and dealing with the contractions in the back seat of the car seemed more challenging. I was desperate to arrive there so I could settle into a routine again.

In preparation for birth, we had discussed what we would do once arriving at the birth centre. Upon arrival every woman who is in labour is examined to determine how dilated her cervix is. My doula and I had decided that we would ask for the midwives not to tell me how many centimeters I was dilated. Women can dilate very rapidly to 10cm but it can also take hours to get from 4 or 5cm up to 8cm. Knowing how dilated you are can create a negative psychological barrier which is unnecessary and can hamper the process. Upon arrival and examination I decided I did want to know how dilated I was and I was happy to learn I was 6cm, this signified I was in active labour and that I could move into the final stage of labour at any time.

Another thing I had done in preparation for birth was something my doula called “Imagineering”. She had me write my birth story down, exactly how I imagined and wanted it to be. Initially when I attempted this at 32 weeks it was pretty challenging as I didn’t really feel I was even in the right headspace to contemplate labour, but as I re-wrote it later in my pregnancy, it helped me to creatively visualize the outcome that I wanted. Interestingly, my labour was almost identical to the one I had created for myself through this exercise.

The final five hours of labour are definitely less clear in my memory. The birthing centre has a state of the art bath, designed for labour and I was looking forward to getting in to that. It did not disappoint and I felt the buoyancy of the water alleviated some of the pain of the contractions. I labored here for 4 hours, much of which is now mostly a blur. The room was dark except for a few electric candles, we had relaxing music playing and I was able to take myself into a hypnotic state to recover from each contraction.

Although I had always liked the idea of giving birth to my baby in the bath, I intuitively felt like that wasn’t the way it was going to happen for me and after pushing for what felt like an eternity, I was instructed to hop out of the warm water and allow gravity to help baby move down the birth canal. I’m not going to lie, this part was the most painful and challenging thing I have ever experienced. I honestly don’t know how I didn’t beg and plead for pain relief and I know in my mind I was but I had such a great support team around me that I pushed through the pain. Coming out of the water was exactly what my body needed to get bubba moving again and it felt like minutes later I was resting my upper body on a bean bag, giving birth to my beautiful baby.

I remember the sheer exhaustion that followed delivering him, so much so that I left the little guy lying on the floor beneath me while I slumped forward in the bean bag. The midwives gently asked me if I would like to pick up my newborn baby which for a minute I had forgotten I had delivered. I reached down to see the most perfect little boy. He was very clean for a newborn, no vernix left on him and also so calm and present. We spent a few minutes the three of us, just staring at each other. Rafael was wide eyed and glancing up at both Iggy and I.

Iggy was amazing throughout my whole labour, I could feel his presence by my side even with my eyes closed. He was so happy and proud when Rafael was born. Meanwhile, I was completely spent and a little in shock. I felt a sense of achievement that I delivered him naturally, without any damage, but also a little shocked at how challenging it was at times. I remember my doula saying that labour was like a marathon and she was right, it takes mental strength as well as physical endurance. I feel so blessed to have had the experience and grateful to my doula, midwife and of course Iggy.

For now, we are both focussed on the care of our beautiful little boy and all the ups and downs that come with parenting…Thank you for choosing us Rafael.