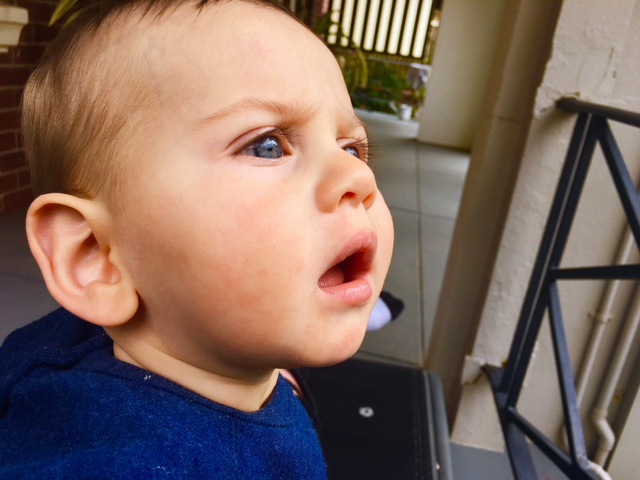 It’s been 4 months since I last blogged about my motherhood journey so far and a LOT has changed (obviously) so it feels appropriate to share some of the more significant happenings here. Rafa is over 7 months old so definitely transitioning from a little newborn baby into more of a big baby/little boy. It’s such a joy to watch him grow and develop and is also not without it’s challenges which I will share more on later. As I pen this, he is lying on the floor of my office practicing rolling and grabbing and just generally being the cutest kid ever (ok I might be a tad biased).

Food has always been a passion of mine and my love of healing and healthy foods was what really motivated me to start my own business. This passion and interest flowed into fertility and also first foods so I had read a lot about feeding infants for years preceding my own pregnancy. All of this research did not prevent me from having a lot of anxiety and hesitation about introducing foods to Rafael. Initially, it just felt too early. Raf wasn’t sitting up on his own and it didn’t feel right to prop him up to feed him solids. The literature suggested 4 months onwards. I intuitively didn’t feel compelled to even start until he was 6 months old. Raf’s initial reaction confirmed my hesitation. He was not interested in the slightest and physically turned away from any offer of solids so I backed off for a few weeks.

Most of the literature that I had read suggested focussing on nutrient dense foods, high in protein & fat. No grains as baby’s don’t possess the digestive constitution to break them down yet. The best starter food was egg yolks, cooked to a semi solid state with all traces of white removed. Following that, liver and some pureed vegetables. I started with the egg and was met with a lukewarm response. Liver was met with a conclusive “no” and the faces pulled were hilariously amusing. At this point I have to confess I was agonising over what to feed my son. What do I cook? How do I prepare it? How do I feed him? How much and at what time? Then quite by accident it dawned on me, Rafa can just eat what we eat – duh! Our diet is mostly slow cooked meats & bone broths and lots of vegetables(organic of course). Perfect stuff to pop in the baby chef and blitz up for him to eat. The next food I tested on Raf was the broth from some beef cheeks we had made the night prior with some sweet potato mash, he LOVED it. Suddenly I stopped agonising over what I was going to feed him to ensure optimal nutrient intake and started freezing very small portions of whatever we were cooking that night. It’s made life much less stressful and is providing Raf with the nutrient dense food with the variety he really needs in these first few months of food experimentation.

So currently Rafael’s foods look a little bit like this;

How often he eats and how much seems to change on a daily basis but I’m ok with that and going with the flow knowing that his primary source of nutrients is definitely still my breastmilk.

Sleep is a contentious issue these days and I feel like it has somehow become indicative of how successfully you are managing motherhood. After having Raf I couldn’t believe how many people would ask “is he a good baby? Is he sleeping through the night?” like sleeping through was the definition of “good”. At the time, my exclusively breast fed baby was waking several times a night for feeds and so I found myself feeling like I was inadequate in some way, worse still that perhaps there was something “wrong” with my baby. This is despite the fact that my baby went down to sleep easily, was able to self settle (put himself to sleep) and regularly slept for 5 hours at night (Ngala’s definition of “sleeping through” is 5 hours). I confess I was tired, ultra sensitive and not feeling as healthy as a consequence of the frequent wakings but I didn’t want to “sleep train” my baby too early, certainly not before he was developmentally mature enough to deal with it (most sources cite 4-6 months as the appropriate time).

I read a lot about sleep training and varying methods for assisting babies to sleep better and longer. Turns out there is a LOT of information out there about this stuff, in fact it would seem there is also a lot of money to be made in the baby sleep arena with friends paying thousands of dollars to specialists to help their little one sleep. I toyed with the idea and decided I would at least try to sleep train Raf myself first before shelling out the big bucks to someone else. I settled on a relatively gentle method designed by a Child Psychologist called Richard Ferber. It took about 10 days and is definitely not the easiest thing I have done in my life. There were some seriously stressful moments when I wanted to throw in the towel and resign myself to multiple night wakes for the next few years but just when I thought I couldn’t take any more, there was a light at the end of the tunnel. Now Raf mostly sleeps 6pm – 7am with one feed at midnight (which I purposefully kept in there as I don’t want to encourage him to wean yet).

Sleep training is not for everyone and I have friends who would argue that it is unnatural and even counterproductive to train babies to sleep so early, but for me it was the right time. I was back working part time and was really starting to feel the effects of 6 months of chronic sleep deprivation. From an ancestral perspective it may not be the way we were designed to nurture our infants but given the modern world we live in, seems to make sense to me. Having had a few weeks now of mostly solid sleep, I feel within myself steadier, healthier and definitely more able to think clearly. I haven’t seen a great deal of change in Rafael as he’s always been a pretty happy and calm baby but it comforts me to know that he knows how to settle himself if he wakes in the night and also that he is getting more overall sleep on a daily basis which is SO important for all aspects of his health.

One thing I had never given much thought to was how I was going to parent Raf. I’m pretty sure I had made some judgements about what I thought was “good” and “bad” based on observation and possibly influenced by my Child Psychologist mother. But having a child of my own changed everything for me. I don’t know if this experience is similar for many Mums but I found myself doing things I swore I would NEVER do (like giving my baby a dummy and following a strict sleep routine). I wanted wisdom and insight to help to me to form some values and principles that would guide my journey as a parent and help to cultivate the best from my child. I just accidentally found Janet Lansbury’s podcast Unruffled and her approach (Respectful Parenting) immediately resonated.

The premise of Respectful Parenting is based on the work of Magda Gerber who believes that our babies are born as complete and whole people and as such should be treated as so. This parenting approach cultivates self confidence and independence, trusting in the child to develop, learn and play without having to entertain them constantly. It involves a lot of communication, attention for essential care giving jobs like bathing and feeding but allows baby to develop at his own pace.

One of the things (and trust me there are many many more) that resonated with me was the emphasis on placing the baby on it’s back, not on the front for tummy time. When a baby is placed on it’s back, it has a vast and wide perspective of the world around it. Babies who are respectfully placed on their back will eventually learn to roll on to their front but placing a baby on it’s front is limiting it’s perspective and bypassing some of the developmental steps required for gross motor development. Babies who remain on their back often take longer to roll and crawl but have more fine tuned gross and fine motor skills leading to less accidents and injuries. Right now, Rafa is spending a lot of time on his back. He can’t roll from front to back yet but is super strong on his front and if placed there will roll from front to back easily. I’m now just allowing him to develop on his back and hoping that I will avoid all the bumps and bruises some of my other Mum friends are experiencing with their early crawlers.

Another part of this philosophy that appealed was to how to communicate to the baby. Janet Lansbury advocates talking to baby in a normal voice, rather than speaking in a high pitched baby voice, communicating clearly everything you are going to do to the baby before you do, almost as if you would to someone who had an incapacitating injury (paralysed/stroke victim etc). This is great for their language development but is also respectful and empowering, involving them in the process of their existence. I could say a lot more about this but I feel I won’t do it justice. It’s very early days for me but I’m totally absorbed in her material, I’m reading Elevating Child Care for the second time at the moment, there is so much to learn!

For now, I’m still loving motherhood and all the new challenges and rewards it throws at me on a daily basis. I’m constantly grateful for this adorable human spirit that chose me as his Mumma on this journey we call life. I’d love to hear from you if you have any comments. xx